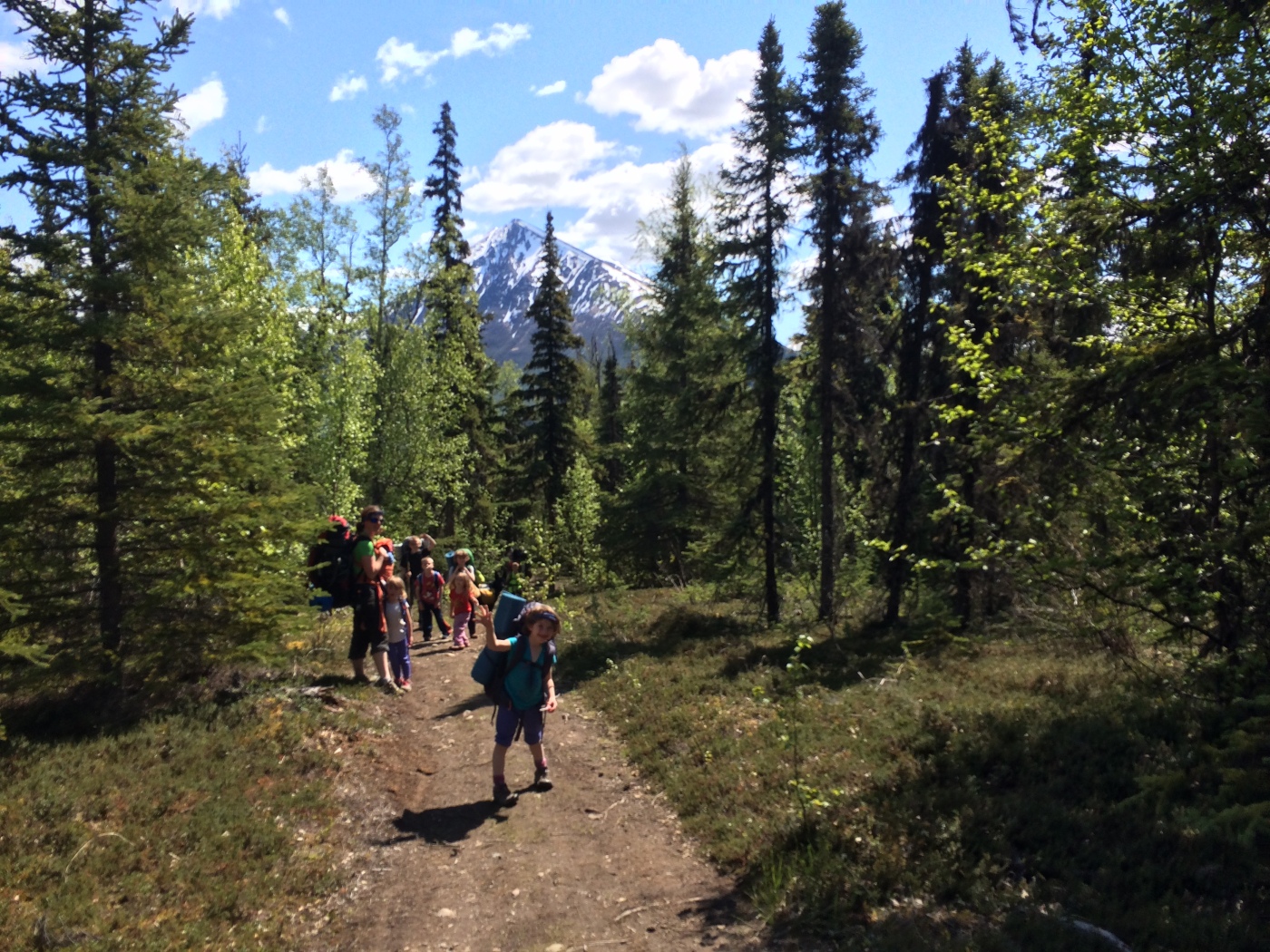 While browsing through last summer’s backpacking photos, I lit upon the first trip we took—along Resurrection Trail towards the town of Hope, and all that greenery and sunshine got me thinking about the season and why I’m looking at summers past. 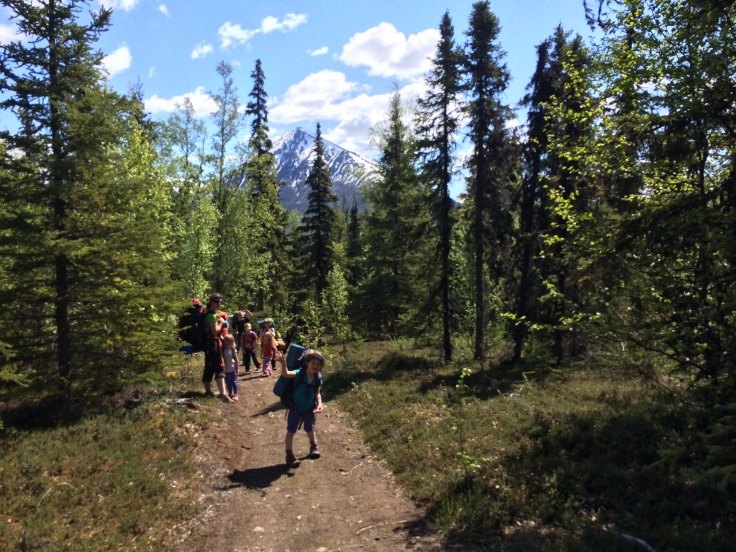 The ice is mostly melted in our south-facing yard, and yesterday’s snow is running in a constant stream down the street.  The kids have been floating leaf boats and skidding bike tires through the leftover gravel from the winter months.  Soon the sweepers will plow through, leaving no excuses.  Arise and come forth scooters, bikes, skateboards and roller skates.

I was born and raised among the cherry and plum blossoms of Oregon’s magnificent spring seasons, crocuses skimming my bare feet as we kicked off our shoes and abandoned sweaters for the warmer afternoons.  So “spring” in Alaska always finds itself between my wry air quotes as it really is more of a break-up (of the snow or of our hearts from winter) or, let’s entertain a more positive bent, is it a resurrection?

Dead and decaying foliage in its slimy, musky grandeur is slowly unburied.  Splendid ice formations sag into muddied puddles.  Maybe this resurrection stuff is dirty and messy, but this entropic soup is the signal for hope.  This show of death is the honored predecessor of new life.

And what do we humans do during this period, waiting for the resurrection of summer to come fully to life?  We hope.  We dream of sun splashed streams and sauntering. 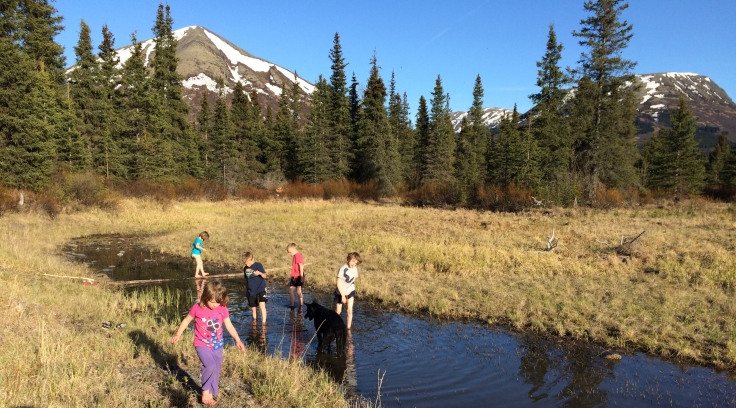 I’ve been on a bit of a Muir kick lately and here’s the newest find:

“People ought to saunter in the mountains – not hike! Do you know the origin of that word ‘saunter?’ It’s a beautiful word. Away back in the Middle Ages people used to go on pilgrimages to the Holy Land, and when people in the villages through which they passed asked where they were going, they would reply, ‘A la sainte terre,’ ‘To the Holy Land.’ And so they became known as sainte-terre-ers or saunterers. Now these mountains are our Holy Land, and we ought to saunter through.” 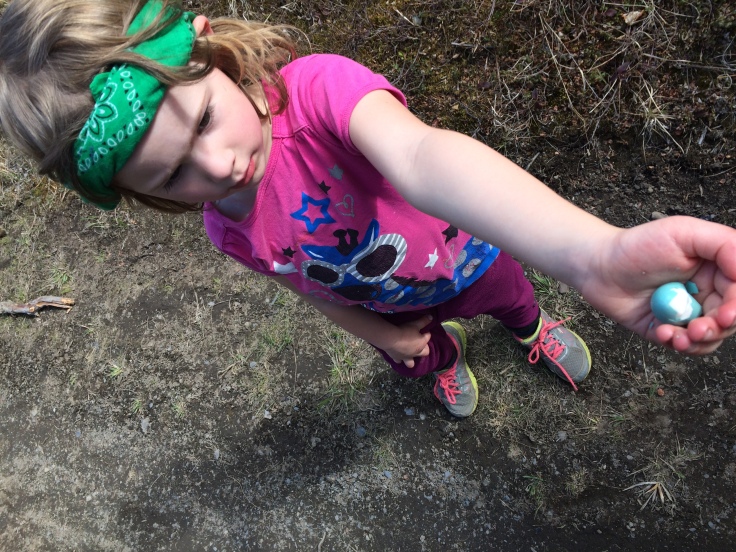 It is in this return to the wonder of the natural world with my children when I feel most wholly myself.  And it is their sauntering that allows them the time to marvel. 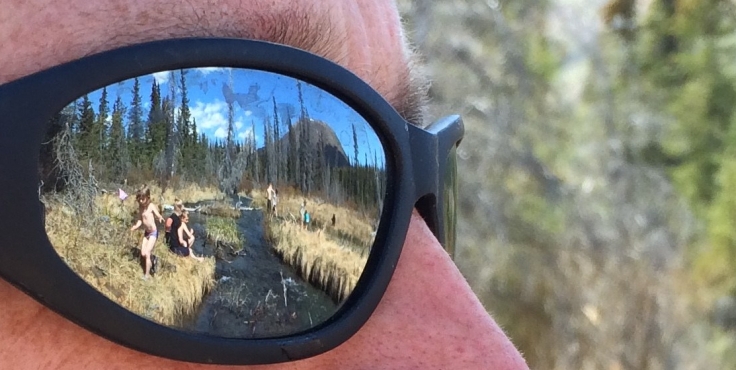 In their discoveries and romping I see reflections of my own childhood spent in the Pacific NW, cultivating my own reverent witness that indeed these impressive mountains and wooded vales and clear, meandering streams and thundering ocean are holy.

And so as this northern resurrection is a sloppy, slow process, I need only remember that in its saunter towards summer, with each step, a little more hope is revealed.  We obviously didn’t make it the 40 miles to Hope, but in the end, hope is the means that keeps us moving, not necessarily the destination.

4 thoughts on “Sauntering Towards Hope”