We were itching to get out of town and had four days to do so.  So we scanned a six-hour radius and landed in Homer, AK.  We chose Homer for one, main reason:

Driving six hours with kids is an adventure.

Well, it is, but not in the good way I’ve been chronicling in this corner of the web.  We actually chose it for an entirely different reason, a reason that justified the means it took to get there.  We started by asking ourselves, “Selves?  Don’t you think vacationing with these kids is often trying?  There’s the preparation, the getting there, the setting up and the filling of time, often all interspersed with bickering, henceforth we find ourselves constantly mediating.”

Now, I know what you’re thinking.  You’re thinking that we are taking our luxuries for granted, to sit here debating about the trials of taking a vacation.  A real ‘first world’ problem, right?  And that may be so.  There’s a low down, hard truth to that argument.  But just for the sake of this debate we’ve started with ourselves, let’s follow the trail down into the woods:

We answered, “Why yes, selves, there is some trouble in going from a real strict routine in our weeks, hurrying and packing everything in a hustle, setting up a campsite and then…sitting, twiddling our thumbs to come up with something to do each day.  Someone will throw out an idea so we’ll go do that, but that just puts us back to square one.  And there we sit, next to the fire, twiddling our thumbs again.”

As Huck Finn notes, it takes a while to settle into a vagabond lifestyle, and four days was not going to cut it.

“and it warn’t long after that till I was used to being where I was, and liked it — all but the cowhide part.  It was kind of lazy and jolly, laying off comfortable all day, smoking and fishing, and no books nor study. Two months or more run along, and my clothes got to be all rags and dirt, and I didn’t see how I’d ever got to like it so well at the widow’s, where you had to wash, and eat on a plate, and comb up, and go to bed and get up regular, and be forever bothering over a book, and have old Miss Watson pecking at you all the time. I didn’t want to go back no more. I had stopped cussing, because the widow didn’t like it; but now I took to it again because pap hadn’t no objections. It was pretty good times up in the woods there, take it all around.”  Adventures of Huckleberry Finn

With our measly four days in mind, we decided to head out for our first camping trip of the season with a purpose; find something that we could engage and disengage in so we could ease into such free time.

Hence Homer, home to the annual Shorebird Festival.  Now this is a serious event for serious birders, but there are a few family friendly sessions and plus, where there’s a real beach (none of this mud-flat nonsense) there will be plenty lazy, jolly, timeless time.

So our first night didn’t go as expected, as our dog ran off after being quilled by a porcupine.  That quills were involved didn’t manifest itself until I finally found him in the shorebird nesting area–a strictly ‘leashes only’ section, the next morning.

Humiliating walk of shame there, let me tell you, right through all the serious birders.

So after our reunion, we headed to Bishop’s Beach.

We had debated camping at Mariner Park campground on the Spit (glorified gravel parking lot), so that we could have instant access to the beach, but the wind proved too strong for the little guy while we perused it so we ended up in the hills, minutes from the beach and overlooking Kachemak Bay, at Hornaday Campground.

Which turned out to be a great choice!  We were surprised by the trex play structure abutting the campground, so when we realized the gold mine we’d stumbled upon, we chose a site from which we could almost see and definitely hear the playground noise.  Our older children loved the freedom of running down to play!

The first festival event we participated in was a slightly disappointing afternoon beach walk that ended quite early as the tide was too far out (seems like that could have been foreseen) and the wind too cold and strong (obviously unforeseeable).  But we found a mermaid’s purse (skate’s egg case) and an over abundance of shells!  We spent the evening cooking marshmallows and playing a hot lava game at the park. 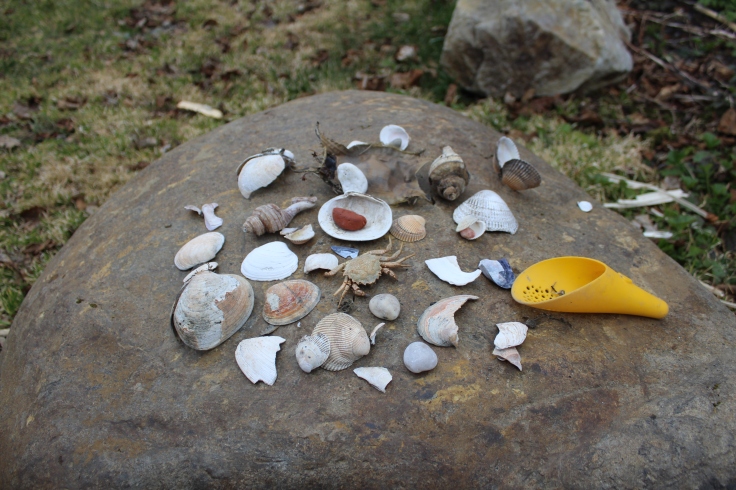 The next day after a lazy breakfast and the morning spent kicking around the playground, we joined up with a Creatures of the Dock tour.  This was so much cooler than I had anticipated (and I was already excited because I LOVE tide pooling and we have spent our fair share of time laying on docks in Port Townsend and elsewhere).

Our guide Misha helped us find and learn about sea stars, nudibranchs, a plethora of different types of anemones, tube worms, limpets, snails, a seal, otter poop, and filled us up with information about things we see all the time such as mussels, barnacles and kelp.  Making the ordinary extraordinary was really refreshing.

Yeah, you can’t see it here because they’re fighting about who gets to be on which step.  But I promise that they did have fun and were really engaged!!!  Smile.

Then we headed to the Islands and Ocean Visitor Center for a birdhouse building activity.  This is the headquarters for the Shorebird Fest.

We were randomly assigned a bird house from three choices, Wren, Owl or…I can’t remember.  I just really wanted the owl house!  But we got the Wren/Chickadee, which is really more appropriate as we have a Wren in the family (she was very affronted when I mentioned I wanted the owl house!) and in our suburban area, we are probably more likely to actually get the correct resident.

So after a few mishaps, the children all learned that Dad should read directions, and had fun hammering and decorating.  Lunch at the ever popular Two Sisters Bakery followed along with exploring the nearby birding area.

Then of course there was more beach time.  The disengaging down time made the events so much more palatable and actually exciting.  We didn’t find ourselves wrangling any Huck Finns or Tom Sawyers because the kids didn’t get worn down by bouncing amongst mind engaging activities.  And because we had an event or two a day, there wasn’t time for the kids to get comfortable enough that they dissolved into their bickering routine that signals listlessness.

Waging war between water and sand through feats of engineering is as old as Mesopotamia. 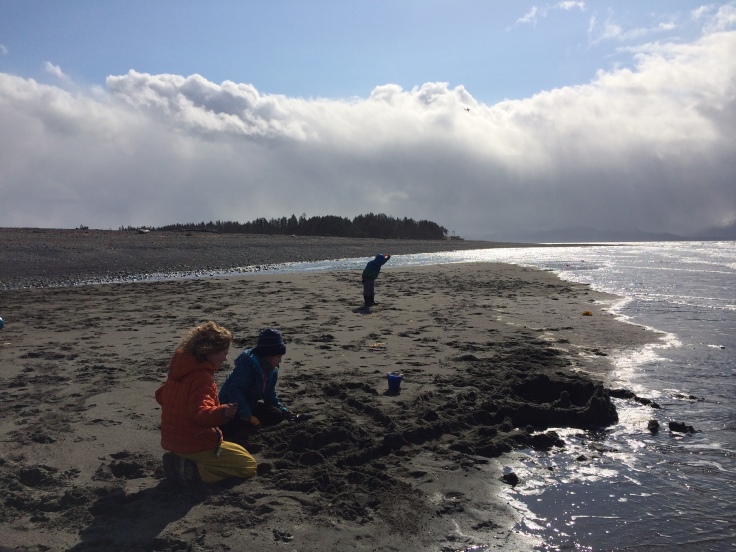 The last day we had to head out, but before we did we hit up two last events.  A live bird presentation with Ghost, the snowy owl (the presenter passed around a wing and leg of a deceased (obviously!) owl.  Guess how much a snowy owl weighs?  I told my kid to guess 10 lbs, thinking he’d seem bright.  Nope, 3. Dang hollow bones–three pounds!!! 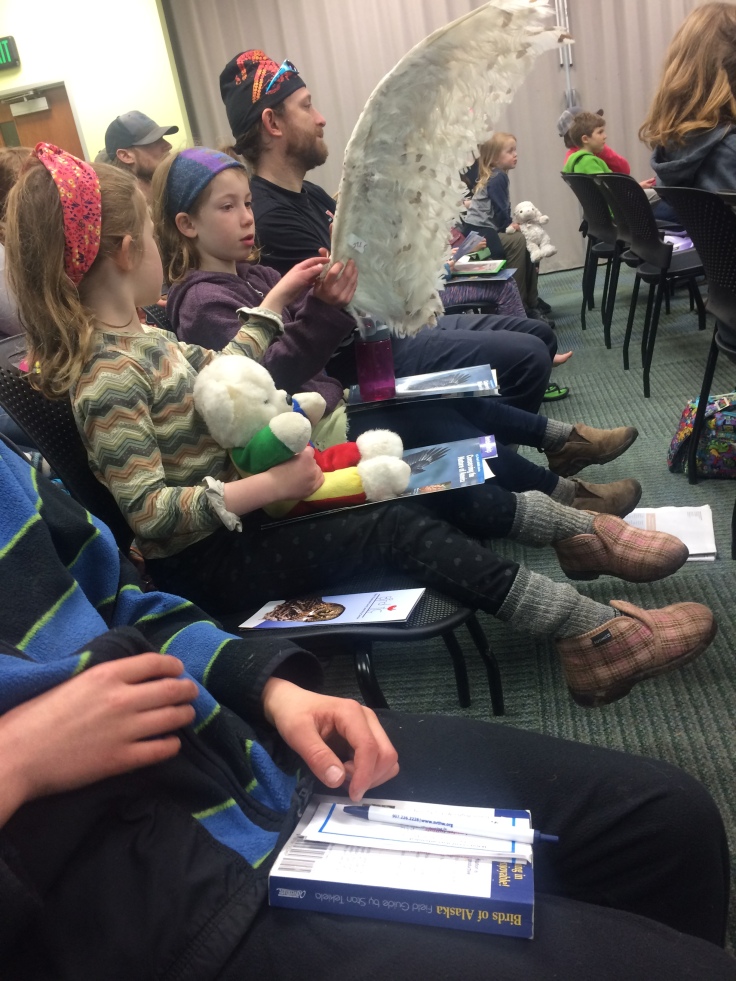 The shorebird festival has a junior birder’s program.  The final requirement was to attend a Discovery Lab, which although a bit overcrowded, if you had the time to help your child out, was pretty well done.  I really enjoyed the listening station that helped you identify bird songs.  And the station below was pretty neat.  We weren’t the best at guessing which eggs belonged to which bird.  Isn’t number 7 beautiful?  A raven’s!  And do you see number 4?  The murre nests on rocky ledges and their eggs are shaped to roll in a circle so that they don’t tumble off!  Check out this demonstration.

We did one last bird walk with Seth, from Center for Alaskan Coastal Studies to hear the sandhill cranes.  The kids were able to see and identify western sandpipers, tree swallows, the cranes, and arctic terns from among the eagles, magpies, and ravens they already recognized.  We weren’t able to identify all the ducks we saw…ah well, the birding spirit may stick and then we’ll be back!

It was a great trip and reminded me that beyond having a destination in mind, sometimes having an event to step in and out of as we’re able helps us all with the pace of vacationing.  Engaging our minds made the luxury of being able to go where we want and do what we want, feel more wholesome.

* You may have noticed they only found 4 new birds.  Have no fear!  We went on a bike ride the next day for Mother’s Day with two other families and the kids were able to identify a Downy Woodpecker and a Green Winged Teal.  The Shorebird Festival’s intent is to create new birders, so mission accomplished!

One thought on “Camping as a Means”