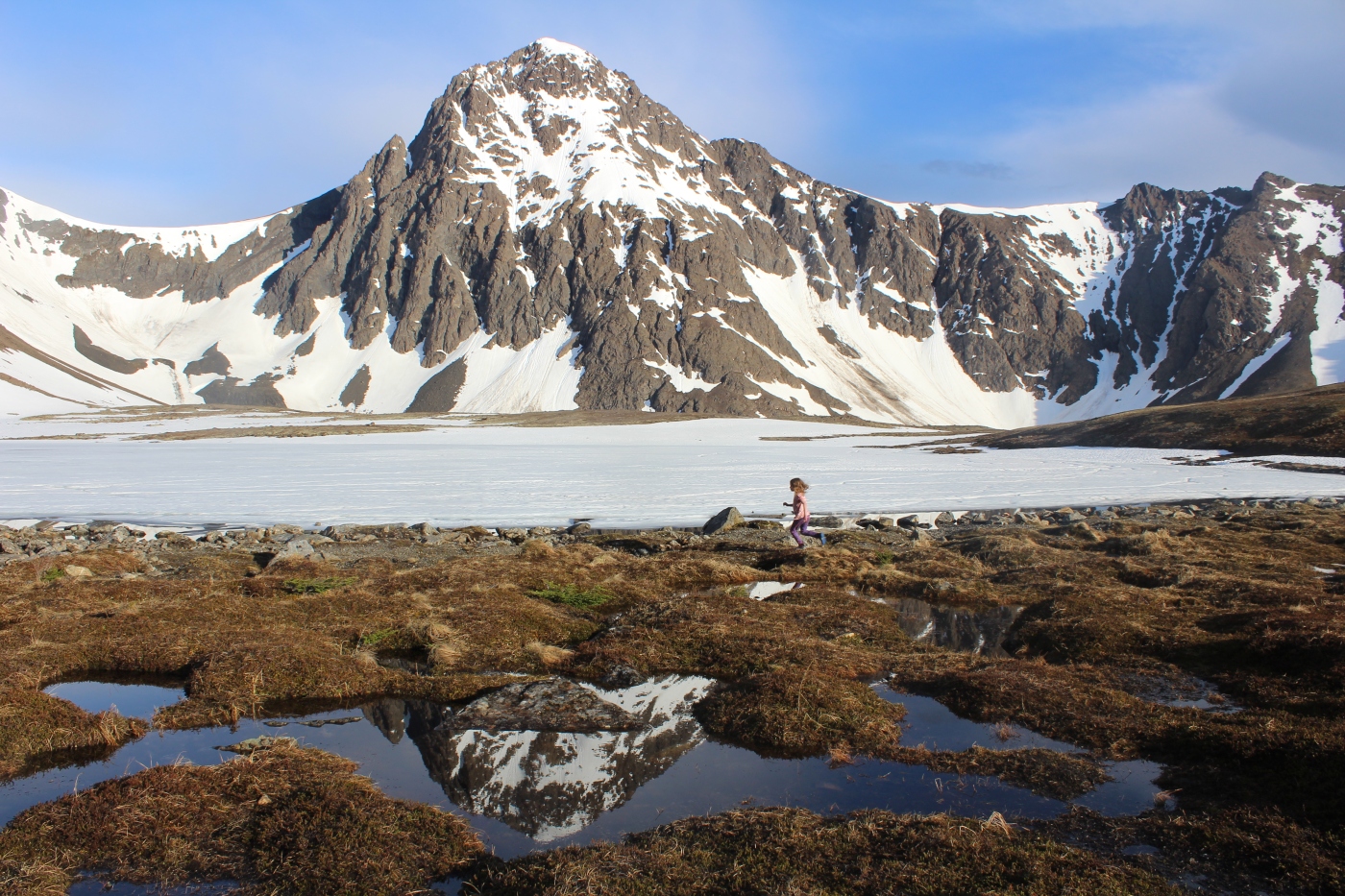 We headed down, or rather up, to Rabbit Lake, a short day hike out of Anchorage, because it is early summer and we wanted to get somewhere.

Because it is a steady uphill climb, you walk back in time, to late spring.

It’s rather like being in two places at once because the city is humming and thrumming just behind you,

until suddenly it isn’t.

And you find you really have gone down a rabbit hole and have ended up somewhere quite different.

After the hemlocks, which were quite fun to rest in the shade of and clamber around in, among the twining, cavern forming branches,

You break out onto the tundra, which is just waking up. It seems more brown than green from afar,

But when you shrink down, you can see another world inside this other place.

There were still some snow fields to cross, but they were just soft, old snows that we slushed through.

And the lake was still partially frozen, although all around the rim, sheets were breaking off, and floating about.

Weather turns quickly out here, so we got the tents up and headed to bed amidst a brief hail storm.

Rabbit Creek is slowly chipping away at winter, in bits and pieces, this early in June.

Children are so creative and these ones quickly discovered the best use for their rain gear.

And then they played bumper islands.

We found strange ice formations which were in the process of disappearing. I wish I could have explained why they formed in such a way better to the inquiring minds, but I just wondered too.

Since this is just a four mile descent into the rabbit’s den, two of our families left the next day to return home as planned.

While the other three of us set about exploring.

Rabbit Lake can be a thru hike to McHugh (or vice versa), so we followed the trail across the river and decided to climb up the ridge to see what we could see.

The tundra is quite spongy in places, full of otherworldly lichen.

The sun came out gloriously and while a few summited, a crowd of us settled on ledges for snacks and sun soaking.

Miniature worlds were discovered and some imaginations shrunk down to bound among the mossy forests.

And then this happened! What was a few drops quickly turned into a two hour hail storm, accompanied by lightening strikes in the valley. The tent was lighting up and the thunder was pretty incredible. As we usually aren’t recipients of thunderstorms, the kids were pretty shaken at first.

And then it rained and rained.

Around 4 pm, the storm let up and we discovered two of the tents had small rivers running under them. So much for picking a good spot!

With wet sleeping bags, we decided the hike out didn’t seem as bad as a chilled night.

So we clambered back the way we’d come.

The kids did great…and it helped that it was downhill.

The sun came out and shone gloriously, lighting the greens so freshly that the storm was just a hazy memory.

And then we realized that the valley before us really was hazy and we smelled smoke, wildfire smoke.

There were no obvious plumes and because we had cell service, we were able to verify that it was smoke blowing north from a fire on the Kenai.

“Begin at the beginning, the King said, very gravely, “and go on until you come to the end; then stop.”

For us, the end and the beginning were the same. Only we have changed.