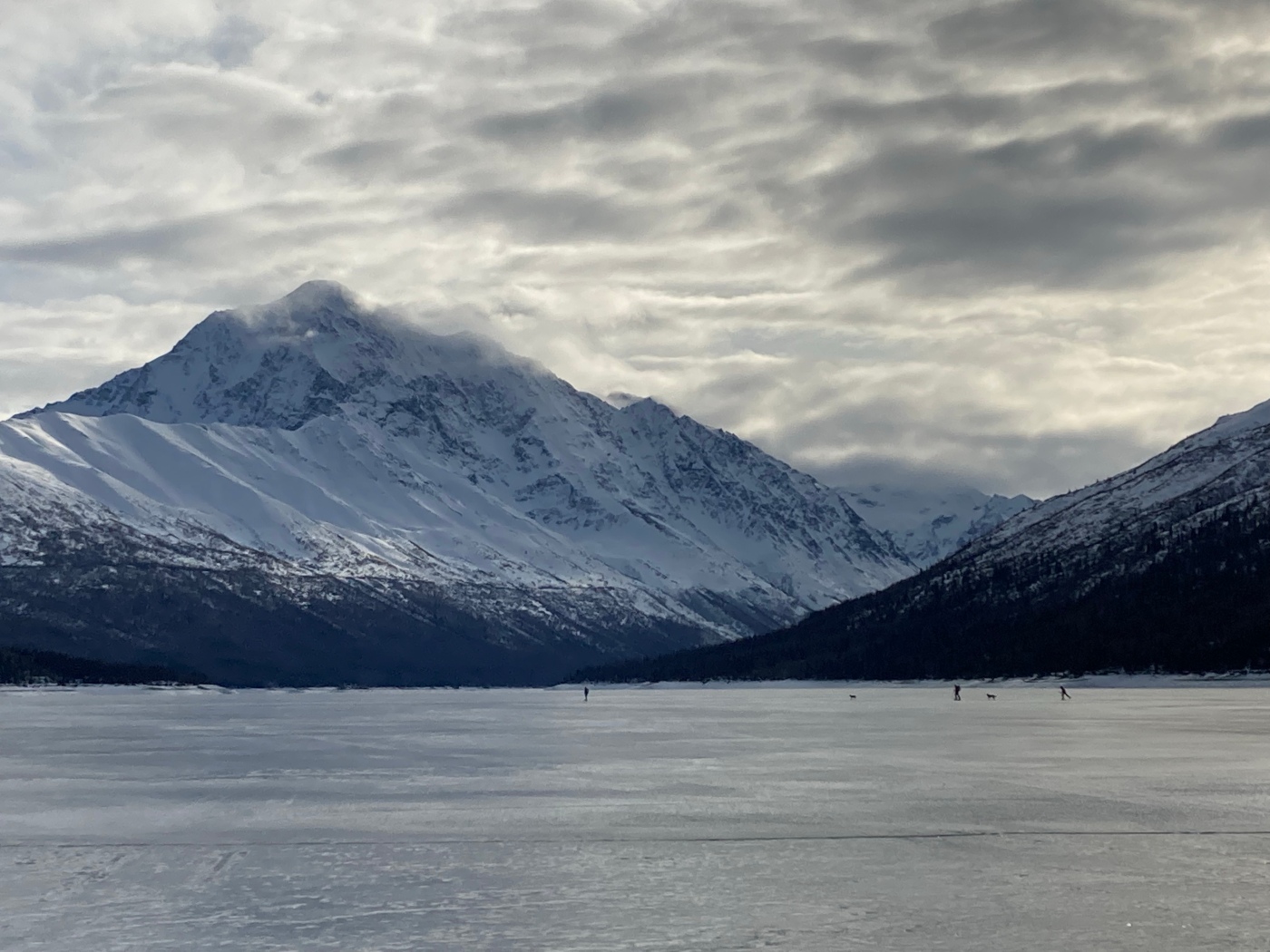 I’ve been single parenting it for two weeks now. Having lived in a community with a high military population as well as North Slope—oil and gas working families, I’ve sat through many a conversation (quietly) between people temporarily single parenting. Having always had a present working partner, I merely nodded empathetically and stayed guiltily mum. And now, one of my dearest friends is single parenting indefinitely after the loss of her husband and so complaining about two weeks feels even more shameful.

So, in deference to all those who have it much more difficult, for much longer, I will just say it was a rough weekend. In an attempt to start the new week out right, with a family adventure, I took advantage of the news that Eklutna Lake was finally skatable (our first wild ice of the 21/22 season—not counting the horrendous state of our street the past week…)

We cut homeschool and woke up ready to head out ice skating and kick sledding for the morning.

That’s when the overflowing mess of emotions from the weekend spilled in. When the teen didn’t get his way in a disagreement he stated he was no longer coming to which I sized him up, decided I couldn’t manhandle his lanky body through the door, across the verifiable ice rink we are currently calling a driveway and manage to buckle him into his seat. So I gave up, knelt in front of him, told him I’d love it if he came and then took his advice to get out.

I cranked up the tunes so I could think my own thoughts—what can I make for dinner? Shoot, I forgot my coat—“WHEN WILL WE BE THERE MOM?”—Are the kicksleds tied to the roof well enough? What’s that flapping? Probably should’ve brought snacks. All those brilliant, intuitive thoughts the luxuries of stay-at-home motherhood leave time for—“HOW MUCH LONGER NOW, MOM?”

But we made it and the only other car in the lot was leaving. I grabbed some beta from the young couple because I’d neglected to bring a drill or ice screw to check the thickness like a good mom who didn’t want her children to fall through the ice would have. The childless strangers assured me the kids would be fine. Oh, they will, will they? How could you know that when I’m pretty dang sure I’ve messed them up past any possible, future diagnosis of fine? We’re headed for personality disorders but would weep tears of rejoicing if they get maladaptive coping; and you young beautiful people with flashing smiles but no credentials think they’ll be fine…

Well we were fine. The ice is very, very thick. And although as the sun warmed it (and us) up and the lake increasingly chattered at us, we were, actually, just fine.

The sun was out. And the beauty of Alaska on a Monday morning meant no one was around to judge me when we discovered we could shove each other on the kick sleds which would slip, slide and spin for quite a ways (yes, I remembered all the helmets).

The ice was blue brushed through with patches of opaque white and full of bajillions of tiny bubbles trapped in time.

It all felt like it was coming together—yes, in a patchwork, Mary Shelley kind of way, but still, four out of six of us (acceptable odds) were having the family adventure I’d woken determined to have.

And then I relaxed. The girls were entertaining our little guy, the ice was smooth (for wild ice), I was enjoying myself and had even taken some full lungfuls of peace.

I bet you caught my mistake. Yup. I’d relaxed into a false sense of security. That dang young couple had lured me with their empty assurances, the blinking sun had tempted me into a sense of spring (how could I have fallen for that in February!) and the ice, that smooth devil ice, had reassured me it was all going to be slick from here on out.

It was getting towards lunchtime (sigh, should have brought snacks), and the bickering about who had what piece of equipment for how long began. Frustration mounting and already low tolerance plummeting, I hightailed it for the car.

Maybe, I thought, as I drove back in a carful of tunes tuning out the silence my loss of temper had caused, maybe it all comes together just to fall apart just to come together, again and again. And, my wise, intuitive, stay-at-home mom self reminded me, maybe the smiling, happy people were right. Maybe we will all be “rather well adjusted, given the circumstances” (Ruth Taygan).

Maybe that’s the definition of fine.

2 thoughts on “When it all comes together: it falls apart”